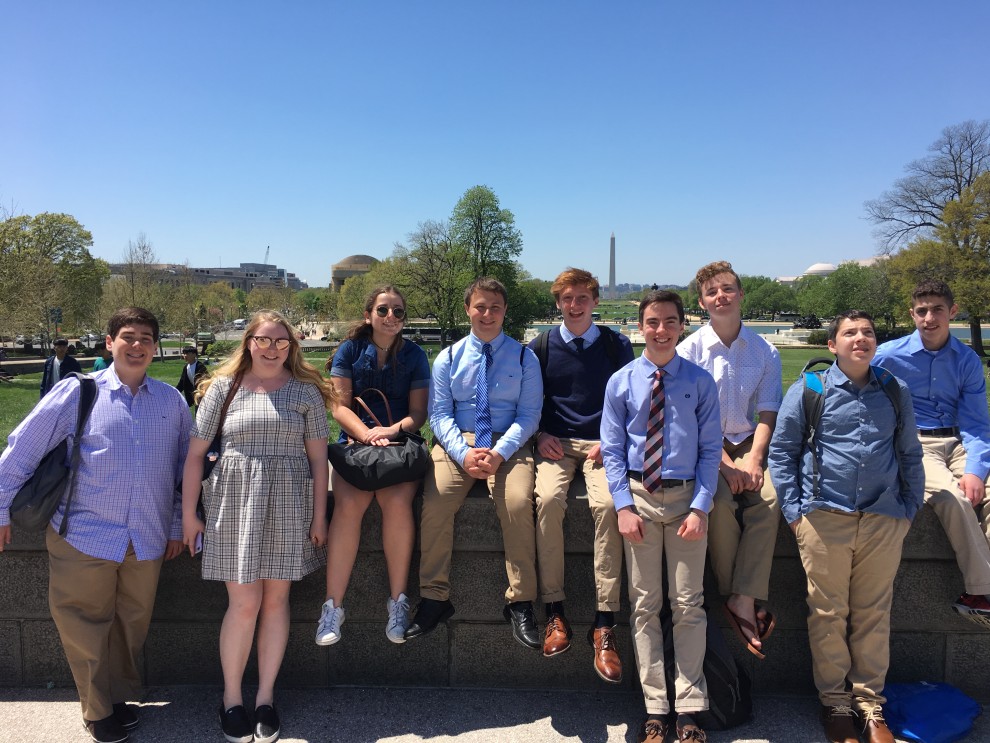 On April 29, students from the Shalshelet class, comprised of Jewish teens from all over the Lehigh Valley, departed on our annual out-of-town trip. This year would be especially unique because not only did we travel to Washington D.C., but we also stayed overnight. The class advisors, Ofer Shimoni and Alicia Zahn, chaperoned.

After arrival, we checked into the hotel and ate lunch before going to our first stop: the National Holocaust Museum. While most of us had been to the museum previously on the eighth grade religious school trip, we still found ourselves absorbing every piece of information as if it were our first time hearing it. Walking through our people’s dark and horrific past provided an enriching experience that allowed us to remember and honor the memory of the victims. Not only were we seeing it through more mature eyes this time, but there was an added exhibit at the end that none of us had seen before.  The addition was a display about the crisis in Syria that made us think about what “Never Again” really means today.

We mixed educational activities with fun. One of the liveliest activities was when we visited The Great Escape, an escape room where the group would be locked in a room and given one hour to use the clues provided to find a way out. We tested our skills solving riddles, puzzles and math equations in order to find the key that would let us escape. We cooperated and tried not to scream at each other, but we did not quite succeed in escaping on time, although we were very, very close! After a long day, we headed to the Char Bar for a delicious kosher dinner and then back to the hotel to get some rest before the busy day that lay ahead.

The next morning, we found our way to the National Mall to go on a tour of some of the nation’s most famous monuments, with a Jewish twist. Each monument we visited, our tour guide provided some Jewish history connected to the monument, in addition to its national significance. Some of the monuments we visited include the Washington Monument, the World War II Memorial, the Lincoln Memorial, the Martin Luther King Jr. Memorial and the Albert Einstein Memorial located in front of the National Academy of the Sciences.

Directly after the tour, we enjoyed lunch at the FDA’s public food court. From there, we changed into business attire and made our way to Sen. Pat Toomey’s office to sit down and meet with a representative of the Pennsylvania senator. During the meeting, we led a discussion which focused on the refugee crisis and gun control, two topics we all feel strongly about and wished to advocate for. Each student was able to participate and voice their opinions to the representative, who at the end of the meeting praised everyone for leading such a well-spoken and well-educated discussion. Next, we were given time to explore the various Smithsonian museums on our own. We spread out in groups and chose to visit the National Air and Space Museum, the United States Botanic Garden, the National Museum of Natural History and the National Museum of American History. This marked the end of our educational, fun and valuable trip.

One of the participants, Joelle Pitkoff, summarized the experience: “We were able to see DC through a Jewish perspective and able to have a great time with friends!”

We thank our advisors, Ofer and Alicia, for taking us and giving us an unforgettable weekend. What a great culmination of a great year in Shalshelet!