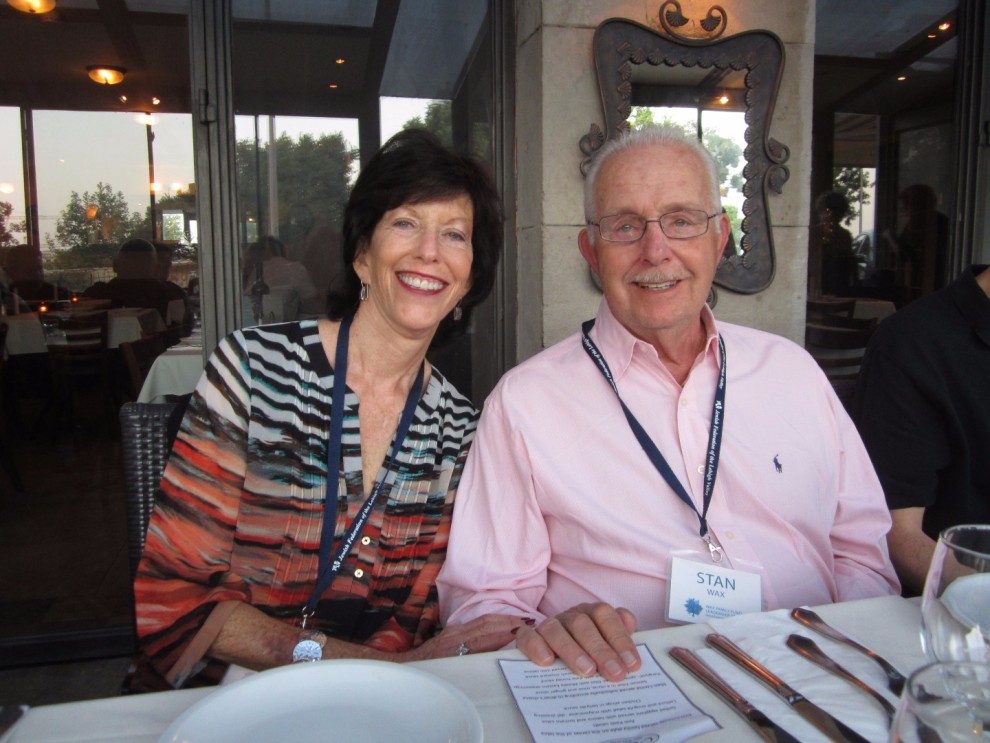 It is with great sadness that we mourn the recent passing of Stanley H. Wax, a distinguished Lehigh Valley Jewish community leader and honorary vice president and past president of the Jewish Federation of the Lehigh Valley.

Born in Brooklyn, New York, Wax had a long and impressive career in the apparel industry starting in 1966 when he joined Country Miss, Inc., the first women’s apparel company in America to be publicly held, which was located in Forks Township. He eventually became its President and CEO, establishing it as a force in the apparel industry and growing the company to 2,500 employees. After leaving Country Miss in 1989, he served as president of the Leslie Fay Retail division from 1993 to 1995, and he was responsible for the most outlet centers in the country. His remarkable professional achievements were honored by the outlet industry when he received its Founders Award in 1990.

Wax was a pillar of the Jewish community in the Lehigh Valley. As a president of the Federation, he believed strongly in creating and maintaining a united community. “Stan’s longstanding involvement as a leader in the Jewish community was staggering,” said Rabbi Moshe Re’em. “He was a member and supporter of TBE, KI, Sons of Israel, and the Hebrew Congregation of St. Thomas. It didn’t matter your denomination – community and unity of community were important values for both Stan and Vicki. One of the aspects that Stan loved about this community was the lack of infighting and the way in which the various denominations all got along and were united.”

His other Jewish Federation leadership included past chairman of the Lehigh Valley Jewish Foundation and, for over 20 years, he served as chairman of the Foundation's Investment Committee. In 1992, he received the Endowment Achievement Award from the Council of Jewish Federations for establishing supporting foundations of the Federation's constituent agencies. Fellow Foundation Board member Sandra Goldfarb remembered Wax as “a huge force and wonderful influence on the community. He gave a lot to our whole community, and he will be missed by everyone,” she said. He also served on the boards of directors of Congregation Keneseth Israel and the Jewish Community Center of the Lehigh Valley.

He held leadership roles at the Jewish Day School, the Jewish Day School Endowment Foundations, and the local chapters for State of Israel Bonds and the American Israel Public Affairs Committee. Eva Levitt, who served with Wax on the board of the Jewish Day School, also organized missions to Israel alongside him for many years. “He was so enthusiastic about going to Israel that it was really easy to get people to go,” Levitt said. She, like so many others, was inspired by his boundless energy for the community. “Stan was a contributor, an encourager, a very not just financially but also with his time. He served on many committees and boards. It always impressed me how he found the time to do all that he did. He will be sorely missed,” she said.

The Wax Family Fellows had the opportunity to spend a year learning about Israel advocacy, a subject that was of the utmost importance to Wax. The year culminated in a mission to Israel in the summer. Wax Fellow Israel Zighelboim came away from the experience with a renewed commitment to Israel and the Jewish community here in the Lehigh Valley. “Our Jewish community lost a pillar of cloud and fire,” Zighelboim said. “Stan Wax was a man of strong values, unbendable principles and never ending commitment to our Jewish community. He taught me and so many others a thing or two about ethics before politics, about always doing the right thing and leaving a mark.” Beth Kushnick, another Wax Fellow, echoed Zighelboim. “We hope we will inspire others to give as Stan did and when think you have given enough, dig a little deeper and give more,” Kushnick said.

Stan and Vicki were also instrumental to bringing PJ Library to the Lehigh Valley in 2011, through which 400 Jewish children receive free books every month.

Wax is survived by his beloved wife of 51 years, Vicki Wax, his children, Nancy and Steve Goldman and Robby and Laurie Wax, his five grandchildren Alexander, Samantha and Zachary Goldman and Benjamin and Daniel Wax, and many other relatives.