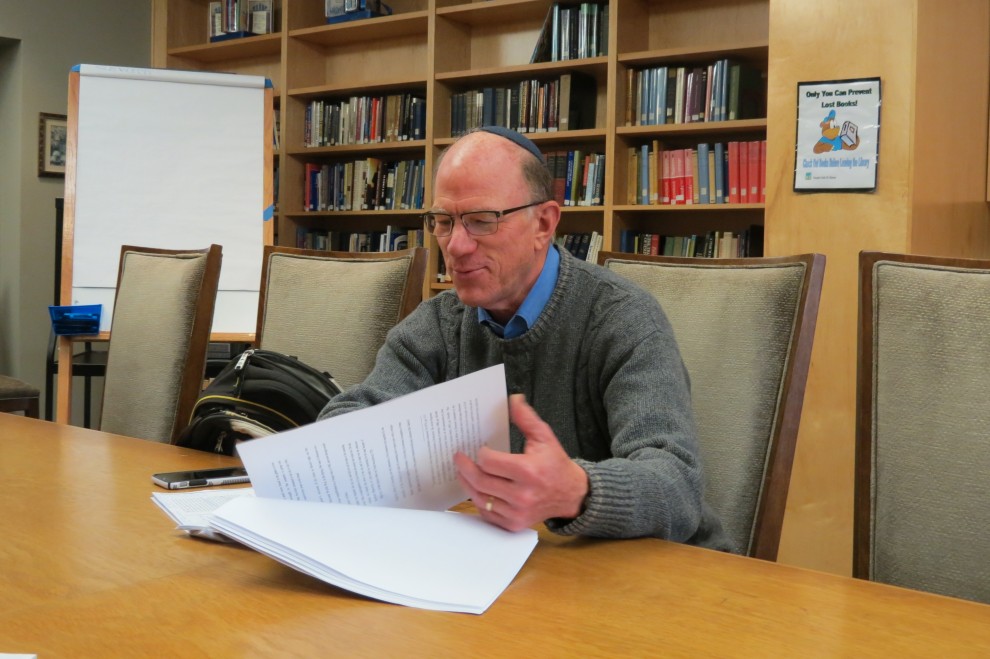 Every participant in Rabbi Moshe Re’em’s class arrived with the 40 pages of assigned reading annotated, with extra materials pulled up on phones and tablets, and with excitement to learn. But this was no college class – instead, the participants in this weekday class come from around the community to engage in an academic and spiritual journey to the Holy Land.

“[The class] is a literary examination of Jerusalem,” said participant Michael Langsam, adding that he attended the sessions to learn about the “place that Jerusalem had in thoughts and prayers in 2,000 years of Jewish culture.”

On May 9, the fourth week of the Jerusalem-based class series taking place at Temple Beth El offered in honor of the 50th anniversary since Israel gained the territory of Jerusalem in the Six-Day War, participants read and discussed Shmuel Yosef Agnon’s “Tehilah,” a poignant story in which the 104-year-old titular character can be interpreted as a metaphor for the “female Jewish divine dwelling in the city of Jerusalem, the Shechinah,” Re’em said.

The class began with a biographical discussion of Agnon, who won the Nobel Prize for Literature 50 years ago, according to the Hebrew calendar. A summer class beginning after the Jerusalem classes are finished will focus on his short stories. “I was born in one of the cities of exile, but all the time I imagine myself as having been born in Jerusalem,” Agnon wrote once, a sentiment which carries throughout his works, including “Tehilah.” The unnamed narrator of the piece is a representation of Agnon himself as he shared his experience of returning to Israel from exile during these turbulent times.

As for why this particular text was selected, Re’em cited the text’s production date in the 1950s, when Jews did not have access to the Old City of Jerusalem. At this point in the course, after discussing Biblical, rabbinic and medieval texts as well as travelogues and reports from pilgrimages, Re’em wanted to focus on the transition period with British occupation and a lack of certainty of what the future would bring. At one point in the story, British soldiers take an old woman’s stool as she tries to sit by the Western Wall, only to be stopped by a single look from Tehilah.

The group then turned to discussion, particularly focusing on Tehilah’s ideas of sin and redemption. Toward the end of the story, she asks the narrator to write a letter for her in formal script to bring to Heaven when she dies. In the letter, she apologizes for her father breaking a betrothal, an event that she believes led to the deaths of her two sons. Believing that language is infused with holiness, and that a person has a limited amount of words to speak during a lifetime, she spends her near-final words on telling her story and dictating the letter.

Agnon’s centrality of Jerusalem, the group came to realize, is not political – it’s religious, and it’s filled with magical, mystical meaning. The story is built upon central Jewish principles of mitzvot and the ancient idea of coming back to exile after the 79 C.E. expulsion of the Jews from Jerusalem. Tehilah herself speaks of Jerusalem as an inherently special place, responding to an addition of “Holy City” to Jerusalem’s name by saying that “when I say ‘Jerusalem,’ I add nothing more, since the holiness is contained in the name yes, in the very name itself.”

Re’em hopes insights like these will “give the students a portal into these time periods” in Israeli history, he said. “For me, Jerusalem has always held a special place, a religious and a mystical feeling. If I can give people a sense of that through other people’s writings, I can hopefully bring them closer and help them experience it.”

For more about the 50th anniversary of the Six-Day War, see pages 20-23 of HAKOL.