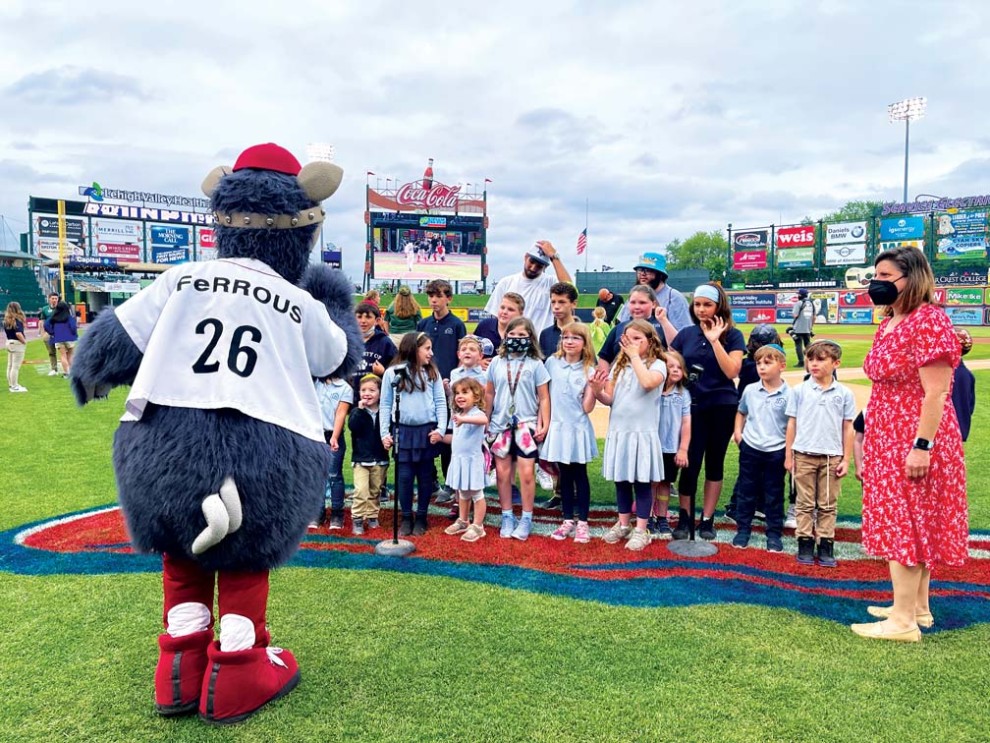 By Carl Zebrowski
Editor of Hakol
May 26 was a night of rarities at Allentown’s Coca-Cola Park. Besides the unusual concentration of Jewish spectators in the right field stands, kosher food was being served on the concourse, and the Israeli national anthem was sung over the loudspeakers for the first time since the stadium opened in 2008. We at Hakol even noticed a stack of hot-off-the-press June issues on a hospitality table tended by the Jewish Federation of the Lehigh Valley, host of Jewish Heritage Night at the Iron Pigs.
It was a nice night for baseball, for the first Jewish Heritage Night since COVID-19 interrupted its six-year annual run in 2020. A sizable crowd was already milling inside the main gates an hour before game time. The temperature was 70-ish, comfortable, if slightly cool when a breeze picked up. The sky was gray, but rain held out until a light mist floated down near the end of the game.
The Federation sold about 320 tickets for heritage night, the most ever, and for the people who turned out to fill the seats, the pregame ceremonies were at least as important as the Triple-A contest between the Lehigh Valley Iron Pigs and the Worcester Red Sox. The “first pitch,” the traditional ceremonial toss, was actually 35 pitches. Many of the participating hurlers were here for heritage night, including a bunch of children; Eric Lightman, executive director of the Jewish Community Center; Gavriel Siman-Tov, community shaliach (Israeli cultural emissary); and Yitzi Powers, a head counselor for the JCC’s summer camp.
Meanwhile, a chorus of students from the Jewish Day School took the field to fall into place behind home plate. They impressively relaxed. Many of them joked around and some did dance moves as they waited for their big moment to arrive. When their cue to sing came, they began “Hatikvah,” the Israeli national anthem, with Siman-Tov and Powers joining them in the back line to supply the low end.
“Our students sing ‘Hatikvah’ each morning with such pride as they start the day,” said Amy Golding, directing the chorus as head of school of the Jewish Day School. “But having the opportunity to sing it publicly will be something they always remember. The connection to their past and their pride for Israel came together that evening. It was truly a once-in-a-lifetime opportunity.”
Next came the singing of “The Star-Spangled Banner,” and then the real first pitch of the game soared from the mound. Fans in the heritage night section who may have not seen one another for a while got the chance to catch up, perhaps while keeping one eye on the on-field action. A food stand set up near the right field stands served kosher hot dogs, knishes, potato chips, and drinks.
“This was the first time since the beginning of the pandemic where everyone was able to be outside and enjoy ourselves at the game,” said Aaron Gorodzinsky, the Federation’s director of campaign and security planning, who organized the event. “It was also a very special night since we were able to hear ‘Hatikvah’ at the ballpark. I am sure I was not the only one who got goosebumps when the Jewish Day School children started to sing. We can't wait to do it again next year!”
The Federation and the Lehigh Valley Jewish agencies and synagogues all did their part to make this heritage night a success. So did the Iron Pigs. Besides their gracious participation in the festivities, they contributed fine pitching and enough hitting to beat the Red Sox 2-1. It was a win-win night.