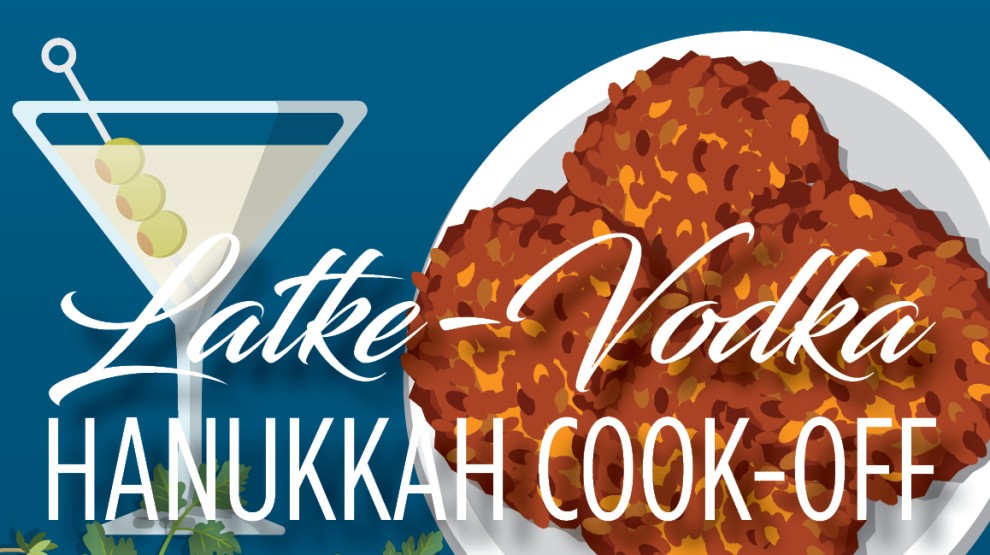 Five teams will face off in front of a sold-out crowd on Dec. 14 to see whose latke reigns supreme.

The teams will also make their own vodka cocktails and will present their offerings to three judges and 100 audience taste-testers. Their creations will be judged on taste, presentation, originality and pairing.

The Latke-Vodka Hanukkah Cook-Off is presented by the JCC’s Adults at the J and the Jewish Federation’s Young Adult Division and sponsored by Whole Foods Market and 100.7 WLEV.

“Potatoes are such a blank canvas and leave a lot of room for creativity,” said Amy Sams, adult programs coordinator at the J. “We can’t wait to see what the teams come up with.”

Robyn learned the basics of Jewish cooking at an early age. She is known to push the limits in cooking and feed many hungry people at her dinner parties. Everything she makes is a work of art. She is thankful to her teammates, Jessica Volchko, Nick Volchko, Brian Ford and Adam Smartschan for teaching her some important life lessons: 5-inch heels and good vodka can conquer the world, spice and the perfect boots are all you need, and you can always make something no matter what is in the pantry.

Lauren leads her team with a spatula in one hand and a potato grater in the other. She is always looking for ways to spice up her latke recipes. She is thankful for this opportunity to bring her sassy cooking style to the Lehigh Valley. With her teammates Beth Kushnick, Ilene Ringold, Debi Wiener and Kira Bub by her side, these bad moms are ready to tempt your taste buds with a latke and vodka duo you won't forget. Join them for an unforgettable evening of friends, fun and a little fire!

Terrence was born in Youngstown, Ohio, where from a very young age, he suffered as a Browns fan. To work out his frustrations, Terrence's mom showed him how to transform simple potatoes into french fries and other delicacies. Following a culinary trip around the world, and several years of free Jewish food at the JCC, Terrence stumbled upon the perfect latke recipe. Terrence and his "Jews by association" teammates, Sara Ritter, Holly Hebron, Stephanie Bennett and Rebecca Wagner, are up to the challenge of putting their own spin on this time-honored tradition.

Rachel received her degree in latkes from Bubbie University and graduated with a double cheek pinch and a kiss on the forehead, the highest honor you can receive at Bubbie's. Following several years as a latke cook in top kitchens of Albright and NYC, Rachel can’t wait to share her talent with the world and with her team, Abby Feinberg, Adrian Shanker, Mike Smith and Cori Rubel.

Chelsea first started cooking in high school after she was inspired by the hours she spent watching the Food Network after school. She likes to choose a recipe for inspiration, look at it, and throw in a little of this and a little of that to make it her own. Chelsea particularly likes sharing recipes among her brothers and finding and creating new twists on old classics, sometimes making them a little healthier, sometimes making them a little yummier. Every holiday is an opportunity to try a new recipe, but Chelsea knows it's always good to have a few tried and true recipes in her back pocket, especially for classics like the latke. She is excited to collaborate with her teammates Dan Friedman, Daniela Viale, Maureen Falcone and Katie Flatley.