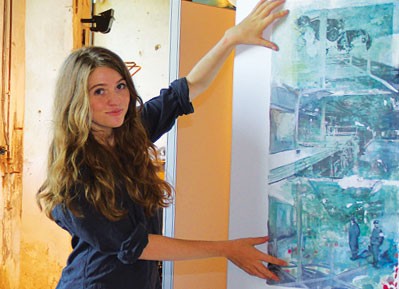 A musty office in an old house in Germany. A pile of letters. A young factory apprentice. Such were the elements of a mystery that grew to involve not only my own family but someone else right here in the Lehigh Valley. As a result, this past September my granddaughter, Rachael Schimmoller, had a solo art exhibit entitled “Traces” in Osthofen, Germany, in an old paper factory which was, at the start of the second World War, used as a concentration camp, and is now a Holocaust museum.

It all came about because my daughter and son-in-law, Miriam and Brian Schimmoller, began their marriage in Germany in 1986. Brian was educated through an ROTC scholarship and was working as a meteorologist in the Air Force. He had already spent many summers in Germany. Brian’s mother was raised in Worms, near where they were stationed, and his grandmother still lived in the old house that Brian had visited many times growing up.

During their year in Germany, Miriam and Brian often visited his grandmother. My husband Rich and I also met “the Omi,” as she was called. She spoke no English so we did not communicate, but we saw how she loved Miriam, whose photo was the only one on her mantelpiece. We believed that this woman, who had been a young mother while witnessing the destruction of the large and vibrant Jewish community in Worms, looked at Miriam, her new Jewish granddaughter, and remembered the insanity of Nazi Germany.

But what about the grandfather? Friedrich Schuch had died in 1950 at the age of 34. Brian knew nothing about his grandfather’s life.

There was a room in the big old house in Worms that the Schimmoller children had never been allowed to explore. When “the Omi” died just six years ago, the room was opened. It turned out to be just an office, but everyone was astonished by what it contained. They found a large stash of documents and letters, some official, and some personal. Mainly they revealed correspondences with two families, the Mayers and the Eberts, and dated from around 1946.

Frederich Schuch, in his early years, had worked as an apprentice in the Mayer family paper business. I have read the translation of some of those letters that went back and forth from Germany to the U.S, and I was struck by the trust and affection between Paul Mayer and the young apprentice Schuch.

The correspondence with the Ebert family was through Arthur Ebert, son of Ludwig Ebert, also in the paper business. The Ebert paper factory was in nearby Osthofen. In the early ‘30s, their building was taken over and used as a concentration camp. During that time, homosexuals, Gypsies, political enemies and Jews had been arrested and locked up in the camp. Ludwig Ebert himself had been held in the camp in 1933. Though the business continued in a nearby building, in 1937 they were forced by a sham contract to give up their business for a supposed sum of 50,000 German marks that never materialized.

Arthur and Henry Ebert escaped to the United States; Ludwig Ebert was killed in Auschwitz.

The correspondence revealed by the letters came about because in 1946, Schuch was asked by the local government to take over and reestablish the functioning of the Ebert paper factory. At some point in 1946, he began writing letters to both Paul Meyer, his former boss, and Arthur Ebert. The purpose of the letters was to help both of these Jewish families to get restitution. Ebert and Mayer gave Schuch power of attorney to enable him to file certain paperwork on their behalf.

Schuch continued his attempt to gain restitution for both Meyer and Ebert until his death in 1950. He was just 34 years old.

As my son-in-law Brian delved into the letters and documents, he decided to try to reach members of the Meyer and Ebert families who might be interested in what he had found. He and Miriam knew I would be fascinated by what they had learned so far, and they told me the names of the families they were trying to locate.

“Ebert? Why I know a woman by the name of Helen Ebert who recently moved to Bethlehem,” I said. I tried to resist calling her, since the possibility of a connection seemed so remote. But I called anyway. I could tell by the silence on the other end of the line when I asked, “Did anyone in your family own a paper factory?” that the answer was yes.

Yes, her father-in-law was Arthur, the son of Ludwig Ebert of Osthofen, Germany.

A year later, the Schimmollers and the Eberts gathered for a Sunday brunch at our house. It felt like a family reunion. We talked about the fathers in both the Ebert and the Schuch families who died so young.  Rose, Brian’s mother, said she felt as if Helen could have been her sister.

Two years later, our granddaughter Rachael decided to start painting. She grew up in Austin, Texas, and in her childhood, she had never exhibited any artistic talent other than the ability to draw very, very small pictures. But in her second year of high school, she began drawing and painting almost as if possessed. She did not have any formal training until she went to college two years ago, but her painting was mature and deep. For a high school project, she wrote a brief story about finding the Eberts in Bethlehem, and she illustrated the story. She is now an art student at Cornell University.

Two years ago Brian had to go to Germany on business for his company, and his work brought him close to Osthofen. He took the time to stop in on the museum that was once the Ebert Paper factory, hoping that the director would be interested in making a home for his grandfather’s documents. It turned out that a woman named Angelika in the museum that day, after telling her a brief rendition of his story, said that she knew his cousin who lived in the same town as she. This man, the cousin, was the son of Schuch’s sister. Brian’s mother had not seen this son of her father’s sister in 50 years.

Almost as an after-thought, Brian showed Angelika Rachael’s paintings that he carried in his iPod, the paintings that had been her high school project. The museum always had art exhibits, and Angelika thought Rachael’s work would be a worthy addition to one of their art shows. That summer, Rachael was housed near the museum and began to paint. The title of her work was “Traces.” She would depict the traces of the people who had worked and who had been held captive in the big factory. The next summer she finished the project. In the end, she had almost 30 paintings, drawings and collages.

There’s a cadence to this story that reminds me of the songs we sing at Passover. It might go like this:

Had any single one of these moments been missed, the story could not have unfolded. I am grateful that life works in such mysterious ways.