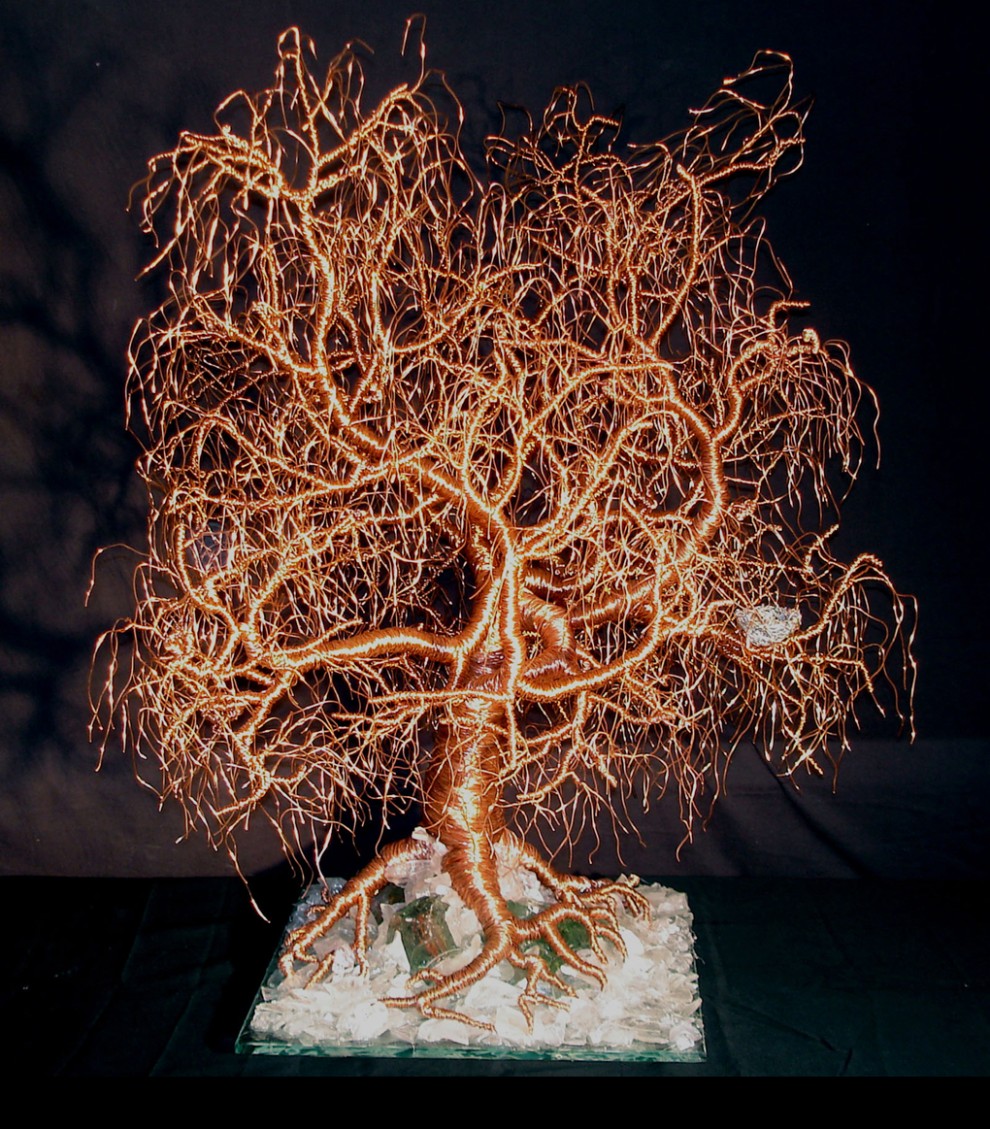 Sal Villano, a sculptor based in Coplay, has a fascination with trees. "Even as a small child, I always loved to observe and draw trees," says Villano. "When I was in grade school and my art teacher would say 'draw whatever you like,’ I always chose a tree."

Since then, he has created thousands of tree sculptures. He bends, twists and shapes wire to make trees of all shapes and sizes, including wind swept trees, bonsai trees, beaded trees, small two-inch-high trees and trees sprouting from plaques that can hang on a wall. The beauty of these tree sculptures is appreciated worldwide – he has customers as far as Japan and India.

Two years ago, he was inspired to create a tree infused with meaning and purpose. After watching a television program about Kristallnacht, the violent anti-Jewish pogroms that swept through Germany and Austria in 1938 and lined the streets with broken glass, he felt profoundly affected and decided to explore this emotional moment in history in his studio. What emerged is a piece called “Kristallnacht, Tree of Life,” made of copper wire and hundreds of pieces of broken glass of various shapes and sizes, some of which are etched with a Star of David.

"Although I view Kristallnacht as something terrible and destructive," says Villano, "I also am amazed how the Jewish people survived that night and are surviving today." He used copper to represent the copper mined by Jewish slave labor in Bor, Yugoslavia, and cradled 12 pearls inside a nest on one of the branches to represent the 12 tribes of Israel. The tree, made of twisted wire, gracefully emerges from the shards of glass. "The tree represents the fact that no matter what is done to the Jewish people, they will be strong, grow, and survive," says Villano.

Villano's piece will be exhibited at The Gallery during the Mayfair Festival of the Arts from May 27-30. Mayfair’s transition from its former outdoor location at Cedar Beach to the western end of the Allentown Fairgrounds building three years ago allowed the festival to create a substantial juried fine art gallery. "We still have plenty of outdoor space for the festival," says Arlene E. Daily, executive director of Mayfair, "but adding indoor space allows us to showcase works of fine art, like ‘Kristallnacht, Tree of Life,’ which we could not do otherwise."

While Villano’s current piece will be on display at Mayfair, you can view his other tree sculptures on his website, salvillano.com. He is currently working on a tree scuplture called “Strange Fruit” based on a song of the same title about the lynching of two African American men in Marion, Indiana, in 1930.