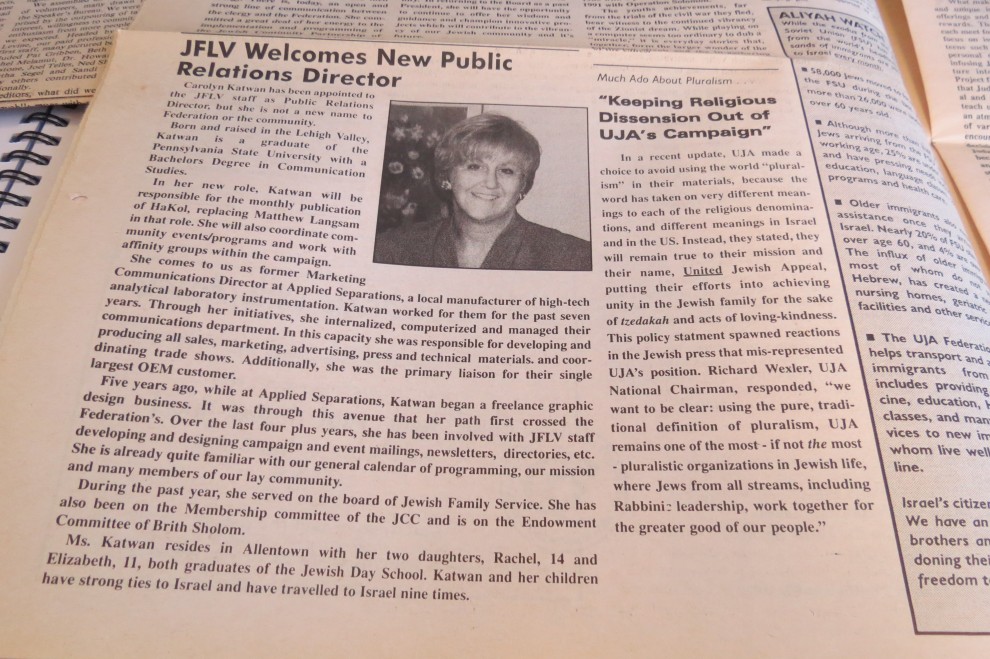 By Michelle Cohen
HAKOL Editor
Editor’s note: The following serves as Part 2 of a story in the September issue about the history of HAKOL.
The HAKOL you hold in your hands (or read on the web) has come a long way from the eight-page, Allentown-focused, non-advertising paper that began 40 years ago. One of the main forces spearheading the changes from the original paper to the HAKOL of today has been editorial involvement. Here, two past editors of HAKOL reflect on the changes they made to the paper and the sentiment of the paper that continues to this day.
Carolyn Katwan was the editor of HAKOL for 13 years, beginning in June 1997. Katwan, a native of the Lehigh Valley, described her experience with HAKOL as giving her a “gratifying connection to community,” a type of connection that was different from what she experienced growing up. In order to cultivate this connection, Katwan made a number of changes to the production process of HAKOL to modernize the paper, its look and the way it arrived in homes.
With the additions of a computer, layout software and a program called Quark, Katwan brought the designing process in-house, so that the editorial board could cut and paste articles – literally – to maximize the space and create a standardized look for the paper. The cost of this venture was covered by advertising, a new feature Katwan introduced to increase the paper’s revenue.
HAKOL began its journey to advertising by offering sponsorship opportunities for a single issue to individual retailers for a flat fee of $1,800. However, since there were no ads in the paper, the advertiser was not getting much exposure, which made it hard to find advertisers who were willing to pay this cost. Katwan’s response to this was to “create a better product” with various measures such as increasing the page count, creating a regular production schedule and designing a more professional look for the paper.
In order to get businesses to believe in HAKOL as a solid vehicle for their advertising, Katwan led her team in a complete redesign of the paper to create a “modern and appealing” product to sell. The resulting ad revenue allowed HAKOL to expand further and begin to dabble in color pictures.
“As ad revenue came in, it enabled us to grow it further,” Katwan said. “We started developing an editorial calendar that would also benefit the advertising but critically to try to keep in sight that even as we introduced special issues and things like that, that the focus and connection was always there back to our mission and the Jewish community.” As she changed the content to add more personalized stories from community members and special sections, she never lost sight of HAKOL’s true reason for existing: the Jewish community that HAKOL served.
“It’s the Jewish connective tissue for the community,” Katwan said. “It’s the one place where everything comes together and is visible and open to the rest of the community, so people can see what’s going on and feel connected and feel a sense of pride in who we are, what we do, within the congregations, within the agencies, and within the Federation and Federation system, here and in the broader Jewish world.”
Jennifer Lader, who edited HAKOL from March 2012 until January 2015, was proud to “build on what others before had established” to bring HAKOL even closer to readers’ hearts and minds. Lader’s vision included deepening HAKOL’s connection to the community by drawing writers from within the community. Lader, who lives in Bethlehem, appreciated the opportunity to meet and interview Allentown and Easton residents and share their stories. It was also during Lader’s time that the paper went full color, beginning in September 2012, which allowed for the inclusion of higher-quality photos that enabled readers to dive deeper into the articles.
The “Jewish Destinations” column, which still continues today, was one way Lader brought people together by asking readers to share stories about their vacations and any related Jewish concepts. Along with high-quality trip photos, this column brings readers into the vacation experience of fellow Lehigh Valley residents. Themed supplemental sections such as the Senior Living section focusing on “Fun & Games” and the “Passover Around the World” section designed to give a global feel to the holidays further engaged readers on subjects they enjoyed.
As editor, Lader frequently asked the question of “how can we be better?” Her way of answering this question went deeper than the two awards HAKOL won during this time. “The main thing we think of is our audience,” she said, adding that “it’s the readers that make HAKOL special.” Her improvements were thus designed to enhance the reading experience and overall readability of the paper.
Throughout all of these changes, one thing has stayed steady for 40 years: a dedication to HAKOL as the Jewish newspaper of the Lehigh Valley, designed to serve and educate our community.