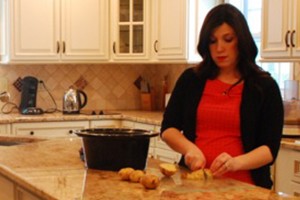 Whether for its healing and comforting properties, its symbolic meaning or its ability to unite friends and family, food has always played a prominent role in Jewish tradition.

Devorah Halperin of Allentown typically hosts 20 to 25 people at the Sabbath meal. “Often, we invite travelers who are in the area and need a place to stay for the Sabbath,” said Halperin, whose husband is the rabbi at Chabad of the Lehigh Valley. Observant Jews adhere to strict dietary laws and only eat foods prepared in a kosher kitchen, and they are prohibited from traveling between sundown on Friday and sundown on Saturday.

The Sabbath meal is a true festive experience – a time to transition from the work week and everyday life and welcome a day of rest devoted to enjoying simple pleasures. At the Halperin table, that means prayers, singing and lively discussion.

“I always bake a challah (braided egg bread),” Halperin said, “and I prepare fish, Mediterranean and Israeli salads, chicken soup ...” Recipes matter, but the key ingredients are the warm, spiritual atmosphere and the joy of one another’s company.

Seders of a Different Flavor

Jane Levine of New Tripoli, a member of Congregation Am Haskalah, has made it a Passover tradition to celebrate foods of Jews living outside of Israel. The Passover seder, a meal rich in its religious and symbolic significance, commemorates the end of Jewish slavery in Egypt and the beginning of freedom as a nation. Matzah and other symbolic foods vary little from home to home. The meal, however, is open to interpretation and cooks can be very creative in its preparation. It usually reflects the flavors of the larger cultures in which Jews live.

Often, a news item inspires Levine. Her “Southern Fried Seder” was in celebration of the 150th anniversary of the Emancipation Proclamation and featured pickled okra, Mississippi-style tilapia and bourbon barbeque chicken. News from Haiti moved her to create a Caribbean menu including fried plantains, jerk chicken and Haitian sweet potato cake.

Finding recipes is easier than one would think. “Wherever you go, there’s someone Jewish,” said Levine whose cookbook collection includes titles such as “Matzoh Ball Gumbo” and “Classic Cuisine of the Italian Jews.”

“Every time I think I’ll run out of ideas, something pops up,” Levine said. “It’s a big world.”