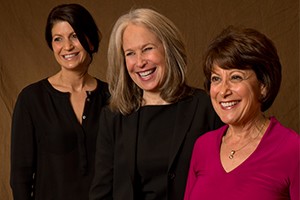 Today, approximately 2,000 women are connected to the Lehigh Valley Jewish community through their synagogues, the Jewish Community Center, the Jewish Day School, Jewish Family Service, many other Jewish women’s organizations and the Jewish Federation, which maintains a vibrant and motivated Women’s Division. Collectively, these women contribute to a wide variety of causes that help both Jews and non-Jews at home and around the world. They give of their time and of themselves to make the world a better place.

Like so many women, it was a desire to connect and meet people that drew these three women to the Jewish community. But more than that, it was a sense of purpose.

Patty Carlis
When Carlis moved to the Lehigh Valley, joining Congregation Keneseth Israel in Allentown allowed her to build friendships and put her background in theatre to good use through her teaching at the religious school. Later, Carlis became president of a local nonprofit theatre company that was performing “The Diary of Anne Frank.” Students came to see the play, then met with local Holocaust survivors. It was the impetus for Muhlenberg College’s Institute for Jewish-Christian Understanding’s Youth and Prejudice Conference, which she coordinated until 2005 and that still endures today.

Karen Cooper
“People who want to give back, who are volunteering in some way, are people that I gravitate toward,” said Cooper, who lives in Easton and is active in the Jewish community through the Federation’s Women’s Division. Having been involved in Federations in Seattle and New York both as a professional and a volunteer, the Women’s Division was a “natural door” to enter the community. It led her to further involvement, as a member of Congregation Sons of Israel, an associate member of two other synagogues, vice president of the Federation and, most recently, president of the Jewish Day School.

Laurie Wax
After visits with her husband’s family in the Lehigh Valley, Wax decided it was time to move here. Friendships quickly formed through the Early Childhood Education program at the JCC, and as her children grew, her involvement at Temple Beth El in Allentown increased. She is a member of the synagogue board and co-president of its Sisterhood four years running. “All of my friends are involved somewhere,” Wax said. “We all support each other wherever we’re involved.”